This weekend Choose or Die, the 2022 video-game horror film starring Iola Evans (Carnival Row) and Asa Butterfield (Sex Education), premieres on Netflix. If you’re not looking for 1980s-themed throwback horror and haunted technology à la 2004’s Stay Alive, not to worry — there’s plenty of great new releases on streaming and VOD this week to choose from.

In addition to Choose or Die, the Spanish comedy drama Today We Fix The World, the Polish romantic comedy The Taming of The Shrewd, and the Nigerian drama The Man of God all come to Netflix this weekend. The latest horror film from The House of the Devil director Ti West starring Mia Goth finally comes to VOD, as well as the Australian action-horror film Wyrmwood: Apocalypse and the cerebral sci-fi thriller Chariot starring John Malkovich.

The Philippine-Japanese sports biopic Gensan Punch comes to HBO Max, while the haunted house thriller The Cellar on Shudder. Oh, and did I mention that another critically acclaimed 2021 movie from the director of Drive My Car comes to Criterion Channel this weekend? Like I said, there’s a lot of great movies to choose from!

To help you get a handle on what’s new and available, here are the new movies you can watch on streaming and VOD this weekend.

The 2022 horror film Choose or Die stars Iola Evans as Kayla, a broke college student and coder who stumbles upon an obscure ’80s text-based survival game supposedly tied to a still-unclaimed $100,000 prize. However, this is no Ready Player One; think Black Mirror: Bandersnatch. Aided by her friend Isaac (Asa Butterfield), Kayla quickly discovers that the game, named “CURS>R,” is (unsurprisingly) cursed as the choices made in the game begin to bleed over into reality in increasingly more terrifying ways. As Jon Foster once said in the 2006 film Stay Alive, “If you die in the game, you die for real.” Also, Robert Englund (aka Freddy Krueger) shows up as a fictionalized version of himself — neat! From our review,

At 84 minutes, Choose or Die is a whip-bang film that rests on brisk, sturdy storytelling. Evans, a surprising newcomer, imbues Kayla with a rich inner life. She’s a bundle of stress and exhaustion, all fleshed out over her hardened face. Her performance begs for other components around her to feel similarly elevated, a request the film can’t complete because of its frustrating simplicity. In that regard, one of the film’s biggest offenders is the wishy-washy character Lance (Ryan Gage), who might work in the building, might be in a sexual relationship with Kayla’s mother, and is definitely her dealer, but languishes as a cartoonish trash predator who’s barely feigning believability.

Where to watch: Available to rent for $19.99 on Amazon, Apple, and Vudu

Ti West’s 2022 horror film stars Mia Goth (Suspiria) as Maxine Minx, an aspiring actress who drives out to an isolated farmhouse in rural Texas with her producer boyfriend Wayne (Martin Henderson) and his amateur film crew to film an adult movie. When the crew unexpectedly find themselves stalked and terrorized by their reclusive hosts, the survivors must mount a desperate bid to escape with their lives. From our review,

Wheel of Fortune and Fantasy

Where to watch: Available to stream on Criterion Channel

While directing his Oscar-nominated 2021 drama Drive My Car, Ryusuke Hamaguchi also directed another slightly lesser acknowledged, but no less affecting masterpiece: the romantic drama anthology Wheel of Fortune and Fantasy. Spanning three different stories involving a love triangle, a plot by a college student to ensnare his professor, and a serendipitous meeting and confession, Hamaguchi’s film explores the complexities, frustrations, and catharsis of human relationships in loving attentive detail.

Where to watch: Available to stream on HBO Max

This is a sports biopic about Nao Tsuyama, a boxer with a prosthetic leg who moved to Philippines to pursue his career and became known as “Gensan.” From award-winning Filipino director Brillante Mendoza, Gensan Punch won the Kim Jiseok Award at the Busan International Film Festival in 2021.

Where to watch: Available to stream on Shudder

A haunted house thriller, The Cellar is both the title of this movie and the place where protagonist Keira Woods’ (Elisha Cuthbert) teenage daughter disappears. As Keira searches for her, she unlocks a dark spiritual mystery that points to something ancient and evil lurking in the house.

Where to watch: Available to rent for $6.99 on Amazon, Apple and Vudu

The follow-up to the 2014 cult hit Wyrmwood, this Australian action-horror franchise looks to continue the “Mad Max, but with zombies” vibe of the first. This movie follows Rhys, a soldier who realizes his “work” has been doing more harm than good. When he encounters a zombie-human hybrid, Rhys sees it as an opportunity to actually save the world.

The Taming of The Shrewd

This Polish romantic comedy follows Kaska (Magdalena Lampraska), a scientist who moves back home after being dumped. When her return interferes with her brother’s plans to sell the family’s land, he hires a handsome stranger (Mikolaj Roznerski) to woo her and convince her to agree to the sale. Surprise, surprise, the two fall for each other! This one gets a TV-MA tag from Netflix, so expect a saucier rom-com than some of their American offerings.

Today We Fix the World

The Spanish comedy drama Today We Fix the World follows David (Leonardo Sbaraglia), a highly successful workaholic TV producer and an emotionally absent father to his 9 year old son Benito (Benjamín Otero). When Benito’s birth mother confides to David that he may not be the boy’s father on her deathbed, the two set out on an emotional journey to find Benito’s actual biological father while exploring the extent of their own complicated relationship.

The Man of God

Where to watch: Available to stream on Netflix on April 16

A faith-based drama from Nigeria, The Man of God follows Samuel (Akah Nnani), the son of a strict pastor who pushed him away from home. When Samuel feels the pull back to his faith, he’s caught between the multiple worlds he occupies.

John Malkovich stars in the 2022 sci-fi thriller Chariot as Dr. Karn, an eccentric specialist who oversees a process of technologically-assisted reincarnation for unwitting test subjects. When a young man named Harrison (Thomas Mann) begins to experience strange visions after meeting a woman (Rosa Salazar) who he loved in a past life, he turns to Karn for help. With time running out, Karn must cure Harrison’s condition or risk endangering the entire system of artificial reincarnation. While at first this might sound like a mash-up between the 2020 supernatural drama Nine Days and Lisa Joy’s neo-noir thriller Reminiscence, the trailer for Chariot looks far freakier than even that, with strangers floating through space like glitched-out avatars and mysterious figures clad in high-tech plague masks that look like something out of Ridley Scott’s Prometheus.

Does the answer to Boston’s cash-strapped arts community lie in Lowell? 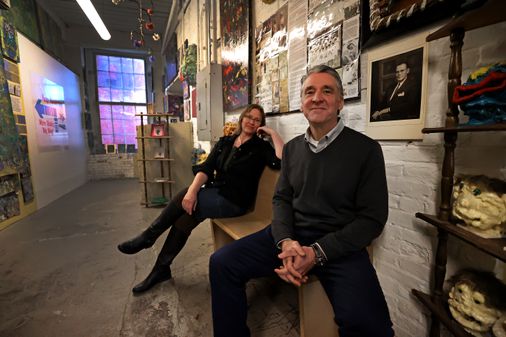