All kinds of experimental music can be found on Bandcamp: free jazz, avant-rock, dense noise, outer-limits electronics, deconstructed folk, abstract spoken word, and so much more. If an artist is trying something new with an established form or inventing a new one completely, there’s a good chance they’re doing it on Bandcamp. Each month, Marc Masters picks some of the best releases from across this wide, exploratory spectrum. February’s selection includes a high-flying sax duo; solo flute enhanced by foil and balloons; text-score materializations; and a 71-minute symphony.

Dana Ma’s Cloning project is aggressive and sometimes harsh—you could even call it noise—but he’s so adept at using space, silence, and volume that his music is less an onslaught than a kind of sound surgery. The six quick tracks on wet circuits, which total only 21 minutes altogether, poke and prod your ears, with Ma’s cracked, metal-bending sounds shooting lasers into your brain. Ma gives each piece a generic letter/number title, indicating that wet circuits is less narrative than lab experiment, a way for him to test the limits of sound and its ability to move the air around it.

For flutist Laura Cocks’s first solo record, she chose pieces by five different composers: David Bird, Bethany Younge, Jessie Cox, DM R, and Joan Arnau Pàmies. Each has a distinct set-up: on Bird’s “Atolls,” she uses 30 piccolos, while on Pàmies’s “Produktionsmittel I,” she adds aluminum foil and glass bottle to her amplified flute. But a consistent vision courses through all five tracks with both disciplined patience and open indeterminacy. On Young’s “Oxygen and Reality,” Cocks’s piccolo floats through the buzzes and scrapes of her electronics and rubbed balloons. During the album’s most stirring stretch, Cox’s “Spiritus,” Cocks goes with just a single flute to create something thoughtfully sparse and grippingly tense.

Jane Deasy
Mouth of the Sound

The drones of Irish composer Jane Deasy can be blindingly pure, such as the light-beam of music she released in 2020 as Notes from the Bath. Her latest work, Mouth of the Sound, is like Notes in that each tape side offers one uninterrupted stretch of sound. But it differs in texture, as Deasy puts her devout tones in a thicker aural envelope. Side A’s title track is echoey and dense, with vibrations overlapping to conjure disembodied voices. The slowly-undulating bass on side B’s “to become” is just as heavy, gradually expanding for 21 minutes into an ocean of drones. Deasy has composed for film and theater, and it shows: Mouth of the Sound feels like a stirring soundtrack for some lost, epic film.

A new five-piece Chicago ensemble with some of the city’s most interesting sound explorers, Honestly Same makes music that sounds like neurons firing, with small, quick sounds darting around. In places, like the squawking “Creative Activities,” the group’s missives sound like space transmissions or Morse code pointed toward outer galaxies. But during other stretches, Honestly Same’s musical dots (created with synths, woodwinds, strings, percussion, and more) connect into atmospheric tapestries—like the 13-minute “Hot Big,” a gradual meditation that evokes a long sunrise over an awakening zoo.

NVS Trio
Doubled Up and Beautiful

Recorded back in 2016, this collection of improvisations from the D.C.-based NVS Trio sounds like it hasn’t aged a day. The group’s judicious interactions have an immediacy that feels like they could be playing this right now. Daniel Barbiero, Gary Rouzer, and Jeff Surak conjure all kinds of moments from bass, cello, zither, electronics, and various other objects. Each track is named for a color, but they all have a similar aural hue, from the drones and crashes of the 15-minute “Yellow” to the plucked rumbles of the three-minute “Purple.” The best improvisation is often marked by the quality of the conversation between players, and Doubled Up and Beautiful is an hour’s worth of musical discussion better than most any podcast.

Electronic musician Gavilán Rayna Russom’s Trans Feminist Symphonic Music could be her magnum opus. An entry in the ever-fascinating Longform Editions series, this 71-minute piece travels a globe-sized path of sounds, sights, and emotions. Through what the label terms “a meditation in five movements on synthesis and gender,” Russom explores minimalism, drone, and ambience, all in service of an abstract narrative that compels at every turn. The first 20 minutes alone, a pulsing space-bound synth pattern is masterful in its own right. But Russom only goes deeper from there, evoking everything from the vastness of an orchestra to the isolation of a single note. Trans Feminist Symphonic Music is the kind of work that takes many listens to absorb but only one to appreciate.

Both Patrick Shiroishi and Jeff Tobias have made exciting saxophone music lately, so a first meeting between the two holds lots of promise, and the results deliver. Recorded when the New York-based Tobias was visiting Shiroishi’s home city of Los Angeles, the three tracks here are stuffed with sounds from two energetic sopranino saxophones. The opening piece is the most pulse-quickening, as the pair jump right into a maelstrom of high-speed playing that sees them racing around, past, and back toward each other. Just as compelling, though, is the much sparser closing track, a 16-minute assemblage of breaths, notes, and distant runs that becomes a kind of respiratory ballad.

UK-based artist and writer Salomé Voegelin chose eight musicians to interpret her text scores for this fascinating compilation. “Interpret” may be the wrong word, as Voegelin claims in the album note that these are “not interpretations but materializations: odd things done and conjured in the performance of words rather than their reference.” On “Hand to Mouth Song,” AGF mixes vocal chants and chirps into a surreal environment; during “Rain Song,” Rie Nakajima spools out rattling oscillations in constant motion; on “Hating It,” claire rousay conjures a world from the spaces in between stations on a radio dial. Best of all is Rebecca Lennon’s “Face to Face,” a collage of voices that feels like thoughts echoing around in one’s mind.

Fri Feb 25 , 2022
This weekend sees the release of Texas Chainsaw Massacre, the ninth installment in the long-running horror series co-written and produced by Don’t Breathe director Fede Alvarez, that sees the homicidal Leatherface turn his chainsaw against business-savvy Zoomers attempting to gentrify his quaint little Texan hometown. If 80-plus minutes of that […] 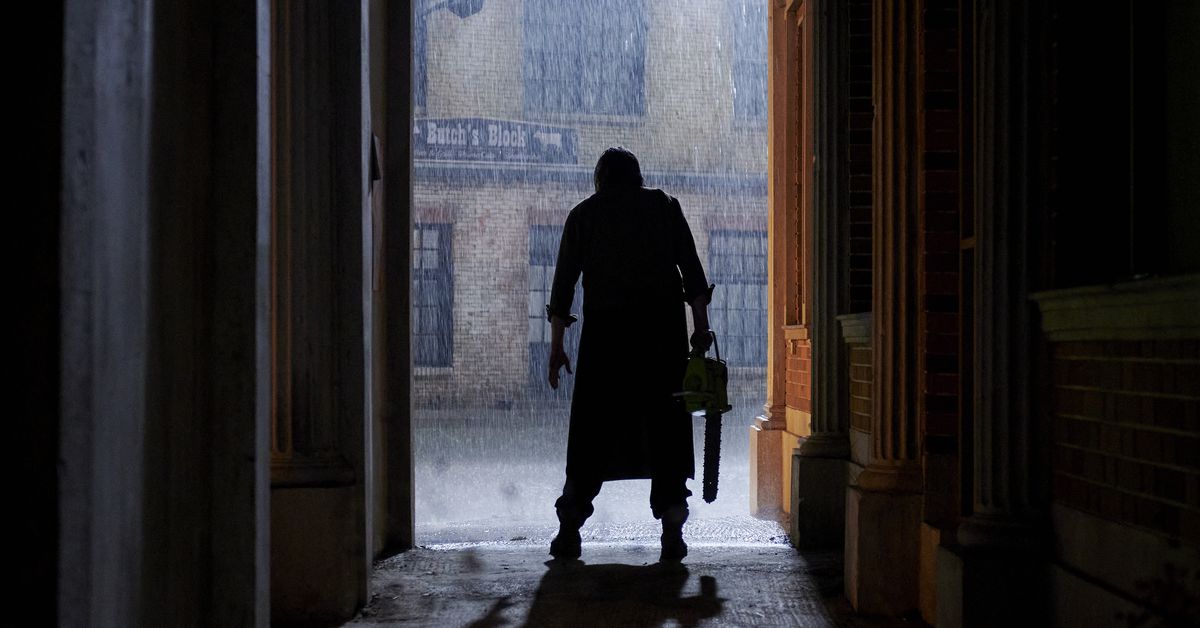