House of Gucci
Out now
Lady Gaga is all the reason anyone should need to catch this glossy crime drama about the demise of the Italian fashion dynasty. If you need further incentive: it’s directed by Ridley Scott, , and Adam Driver, Salma Hayek, Jared Leto and Al Pacino also star.

Frames of Representation
Institute of Contemporary Arts, London, to 4 December
The ICA’s signature annual film festival dedicated to “the cinema of the real” returns, featuring – as ever – an impeccably curated offering of 20 international documentary premieres, this year unfolding under the collective thematic banner of (Re)Imagining.

Pirates
Out now
Filmed in London and set in 1999, in some ways Pirates is simply a classic tale of men on a mission. The mission: to gain admission to the best millennium party ever. The men: hapless lads with dreams of big careers in music. Writer-director Reggie Yates gets us rooting for his charming cast from minute one.

Jessie Ware
Wednesday 1 to 13 December; starts Birmingham
With last year’s Brit-nominated, disco-saturated fourth album What’s Your Pleasure? still riding high following a summer 2021 rerelease, Ware finally gets to unleash it onto venues across the country. Her earlier, more pillow soft-soul should act as ample breathers between sophisticated bangers such as the single Spotlight. MC

Aurora Orchestra With Cassie Kinoshi
Kings Place, London, Saturday 27 November
London’s young Aurora Orchestra furthers its adventurous reputation on this gig with composer-saxophonist Kinoshi, including the premiere of her Three Suns Suite – drawing on her own life as a Black Briton, and the cultural chemistry of her grandparents’ generation. John Fordham

A Catalan Celebration
Queen Elizabeth Hall, London, Wednesday 1 December
The pandemic put paid to events marking the 50th anniversary of the death of the composer Roberto Gerhard. London Sinfonietta is making amends now by including Leo and Libra, the two brilliantly coloured works Gerhard composed for them. Andrew Clements

The Book of Dust – La Belle Sauvage
Bridge theatre, London, Tuesday 30 November to 26 February
This first part of Philip Pullman’s The Book of Dust trilogy is set 12 years before His Dark Materials – and sees two children struggle to protect young Lyra as the waters rise. This stage adaptation is directed by Emily Burns, James Cousins and Nicholas Hytner. Miriam Gillinson

Romeo & Juliet
Royal Albert Hall, London, Wednesday 1 December
A return to the stage for the sometimes brilliant, sometimes erratic Sergei Polunin, famed for walking out of the Royal Ballet, his many tattoos and the 30m YouTube views of his Take Me to Church video. He will be dancing here with the divine Alina Cojocaru.
Lyndsey Winship

Life Between Islands
Tate Britain, London, Wednesday 1 December to 3 April
This survey of Caribbean-British art since the Windrush era should be a feast of creative crossings, literally across the Atlantic, and figuratively. Among the 40-plus artists featured are Hurvin Anderson (work pictured, above), Paul Dash, Alberta Whittle and Sonia Boyce. There are plenty of media, and an urgent history to tell.

Amy: Beyond the Stage
Design Museum, London, to 10 April
The Design Museum is taking the road to success already trodden by the V&A, with high-class pop culture exhibitions that bring the frisson of music and the night into the gallery. The late Amy Winehouse gets the Bowie treatment here with displays of her clothes and a survey of her brief career.

Derek Jarman
Manchester Art Gallery, Thursday 2 December to 10 April
The radical film-maker who made Jubilee, Caravaggio and many more alternative classics was also a powerful artist. Jarman’s abstract paintings and passionate assemblages vividly express his anger and love of life. This retrospective puts his art and cinema works side by side to pay homage to a great British original.

Cathy Wilkes
Modern Institute, Glasgow, to 22 January
The ordinary stuff of life gets a furious second chance as raw, expressive art. Wilkes arranges domestic objects as if she was carving words into flesh. She has been feted at the Venice Biennale, shortlisted for the Turner prize, but perhaps Glasgow, where she lives is the best place to understand her work. Jonathan Jones

Harlem
From Friday 3 December, Amazon Prime Video
Tracy Oliver, best known as creator of the raucous 2017 film Girls Trip, is behind this lively comedy-drama (above), which charts the work and love lives of four thirtysomething friends in New York, while also doubling as a meditation on contemporary Black womanhood.

Yellowjackets
Thursday 2 December, 9pm, Sky Atlantic
When a plane crashes en route to a football competition, it’s the beginning of a lifetime of trauma for the schoolgirls who make it out alive: 25 years on, the secrets of their survival still haunt them. Christina Ricci and Juliette Lewis star in a genre-bending thriller.

Cancelled
Thursday 2 December, 10pm, Channel 4
Iconsequences for inappropriate behaviour – and even criminal activity – are still sorely lacking, but there’s no doubt some people genuinely have been caught in cancel culture’s crosshairs. Richard Bacon meets some of those on the receiving end of social media’s moral outrage. RA

Solar Ash
Out from Thursday 2 December, PC, PS4, Ps5
Set inside a black hole, this intriguing and ultra-stylish game is all about fluid movement and surreal spacescapes. In motion it looks like a dance through enormous, open, colour-saturated spaces, while its giant hostile space creatures call the PlayStation classic Shadow of the Colossus to mind.

Big Brain Academy: Brain vs Brain
Out from Friday 3 December, Nintendo Switch
A party game designed for people who like to show off how clever they are in front of their families. It’s unlikely that the prospect of beating their parents at maths teasers will draw tweens away from Fortnite, but adjustable difficulty makes this welcoming to kids and adults regardless. Keza MacDonald

David Bowie – Toy
Out now
Originally recorded for a 2001 release but held up by record label politics, and later scuppered by a leak online, Toy now arrives as part of the Brilliant Adventure box set, officially two decades later than intended. Featuring reworkings of Bowie songs from the late 60s and early 70s, the album shows an artist in the midst of a creative upswing.

Westlife – Wild Dreams
Out now
The enduring Irish manband return with album No 12, their second since returning in 2019 following an eight-year hiatus. Billed as capturing “the mood of the moment”, it features the uplifting, key change-tastic Starlight and the more typical, stool-bothering ballad, My Hero, co-written by Ed Sheeran.

Fred Again.. – Actual Life 2 (February 2–October 15 2021)
Out now
Producer Fred Gibson – who has worked with everyone from Brian Eno to Rita Ora to Stormzy – returns to his dance-orientated solo project for his second album of 2021. As the title suggests, it diarises an eight-month period, with its 16 songs built around looped vocal clips and found sounds.

Julie Doiron – I Thought of You
Out now
Canada’s cult indie hero – there’s a day dedicated to her in the village of Bruno, Saskatchewan, no less – returns with her first solo album since 2012’s So Many Days. Its lead singles skip between Darkness to Light’s country-tinged guitars, to the more robust, rock-leaning You Gave Me the Key. MC

Masterclass
masterclass.com
Celeb behemoth Masterclass promises that viewers can become experts in their chosen subjects in only a matter of hours. Short lectures are hosted by everyone from Pharrell teaching empathy, to Gordon Ramsay on cooking, to Nobel peace prize winner Malala (pictured, above) on creating change.

Positive
Sky Documentaries, Wednesday 1 December, 9pm
Three-part docuseries Positive tells the story of Britain’s 40-year history of HIV, centring the voices of those on the frontlines of its effects. We witness the transition from an ingrained culture of homophobia to today’s pioneering treatments.

Bent By Nature
Podcast
This podcast from the US broadcaster KCRW is the perfect curio, telling the story of influential but little-known late-night DJ Deidre O’Donoghue. Her 80s show Snap! was a haven for musical exploration, helping to break Henry Rollins and Ride. Ammar Kalia

Sun Nov 28 , 2021
Starting at $40 a ticket and reaching $70 on weekends, the new — unauthorized — “Art of Banksy” touring exhibit has landed at San Francisco’s Palace of Fine Arts, and tickets are already selling out quickly.  Brought to the city by Starvox Exhibits, the same group responsible for the “Immersive […] 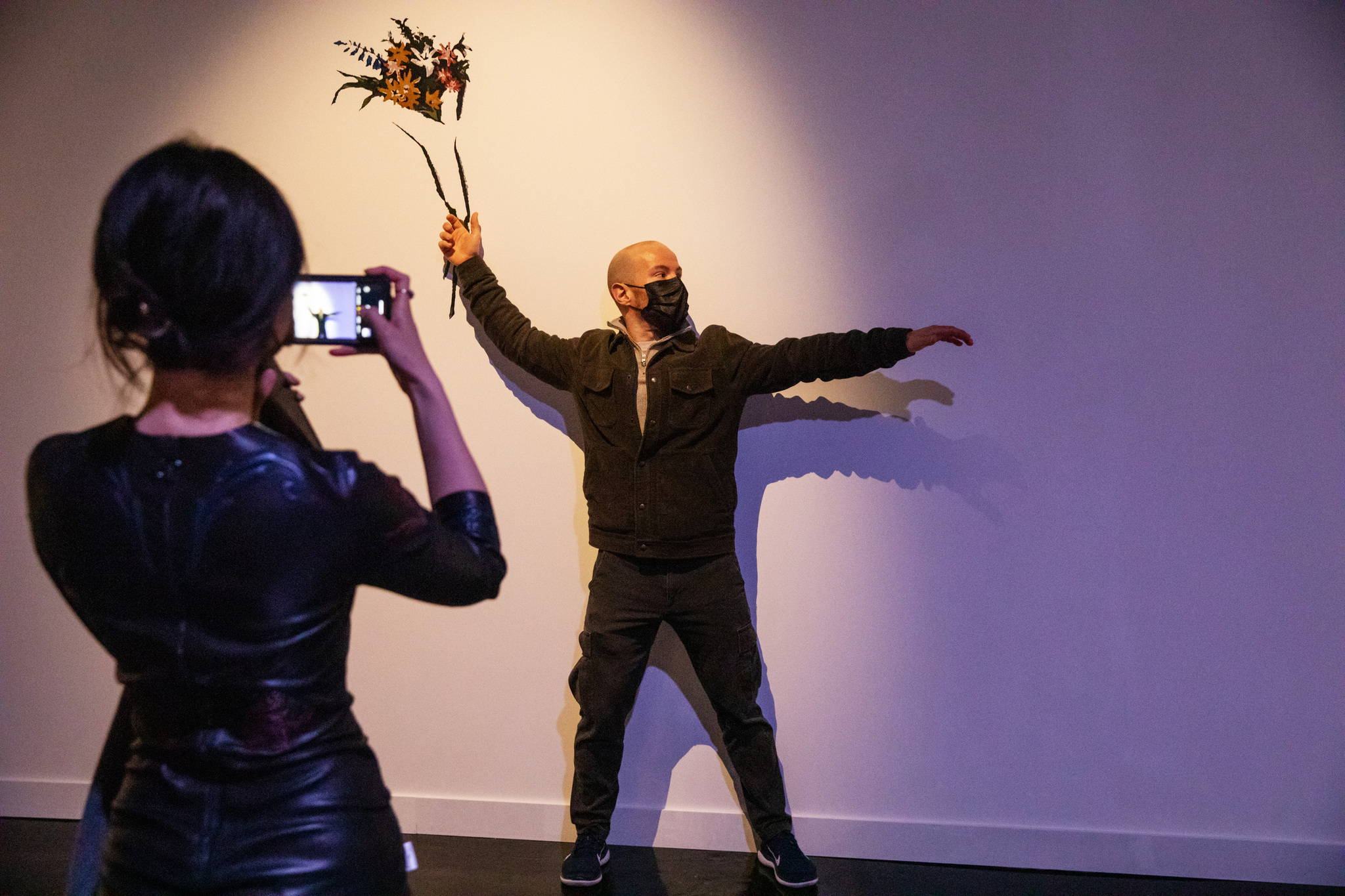