JTA — Late last year, months before a Russian missile landed near the Babyn Yar memorial outside of Kyiv, Ukraine, the site’s foundation announced plans for a new museum to honor the 33,771 Jews slaughtered there by the Nazis in September 1941.

Natan Sharansky, chair of the memorial’s supervisory board, described Babyn Yar as a “symbol of attempts to destroy the memory of the Holocaust,” and said the new institution would be called the Museum of the History of Oblivion.

“The History of Oblivion” would make an appropriate alternative title for “Song Searcher,” a new documentary about Moyshe Beregovsky, the Jewish folklorist and ethnomusicologist who traveled his native Ukraine in the 1930s and ’40s collecting Yiddish folk music and klezmer songs. Before World War II, Beregovsky schlepped primitive recording equipment on his visits to then still vital shtetls throughout the region. During and after the war, he found and interviewed residents and survivors of ghettos in Chernivtsi and Vinnytsia.

The voices that he captured are heard on 1,017 scratchy wax cylinders that for a long time many feared were lost. The film details how they and other material were recovered and made their way to the Vernadsky National Library of Ukraine. They are a treasure trove for scholars and musicians who want to preserve and resurrect a culture that was nearly wiped out.

“Nobody else did any projects like this, of collecting that much music and writing that much about it,” Mark Slobin, an American ethnomusicologist, says in the film. Slobin’s collections of Beregovsky’s work were key to the klezmer revival of the past 40 years.” “Nobody did a project like that in Poland when the culture was alive. Nobody did it in these other places where the Jews lived. So it stands as a monument not just to where he worked in Ukraine, but for the whole population of Eastern European Jewish culture.”

Various klezmer musicians are seen in the film, playing the songs that Beregovsky collected. Many of the songs reflect the misery of the Jewish experience under the Soviets, the Nazis and the Soviets again. Even a so-called “humorous” song – sung here by Psoy Korolenko, a puckish Yiddish singer from Russia – is a revenge fantasy about confronting Hitler after the war.

The film never loses sight, however, of the incalculable human toll of the Holocaust in Ukraine. Survivors who were children during the war tell of the horrors of the forced marches, the suffering in the ghettos and the grim fate of the Jews in Transnistria, who were spared the concentration camps but were starved and shot to death by German and Romanian occupiers.

There are also rare color photographs of the slaughter at Babyn Yar, one of many moments when the pictures and stories of trapped civilians and desperate refugees blur with this morning’s headlines out of Ukraine.

But the history, like today’s headlines, is head-swirling as you try to keep track of the shifting occupations and the various degrees of villainy. The Soviets are celebrated as the liberators of Auschwitz, but almost immediately turn on the Jews. Their targets included Beregovsky, who by this time had founded or led a slew of important and perfectly legal academic institutions in Russia and Ukraine: a Cabinet for Research on Jewish Literature, Language, and Folklore; the Archives for Jewish Folk Music; the Cabinet for Music Ethnography and Audio Recording at the Kiev Conservatory. He had even received his PhD from the Moscow Conservatory, with a dissertation on Jewish instrumental folk music.

By 1949, such Jewish ethnic activities were considered “cosmopolitan” by the Soviets, and Beregovsky was shipped off to Siberia, where he joined other slave laborers in building a railroad. Already a grandfather, he found some solace in leading the prison camp’s choir, and the film includes snippets of letters he wrote home to his wife Sara in Kyiv, asking her to send – what else – sheet music.

Beregovsky was able to return to Kyiv after the death of Stalin, where, before cancer would kill him in 1961, he was able to arrange his private archive.

What was preserved? What was lost? And what might still be lost as the current war grinds on? Much of the film was shot in Ukraine in 2019 and 2020, with the camera lingering on Kyiv’s pastel-colored academic buildings, the lazy Dnipro River and the waving wheat in the country’s bread basket. You recall this is a “pre-war” Ukraine, and then realize you are thinking back about three and half weeks.

Jews have a complicated history with Ukraine. (How complicated? The filmmakers acknowledge the “generous support” of Roman Abramovich, the Russian Jewish oligarch who is being hit with a slew of international sanctions thanks to his close ties with Vladimir Putin.) Perhaps one and a half million Jews were killed there. They were the victims of the Nazis, but also of the Germans’ local collaborators. Once home to the second-largest Jewish population in Europe, and still a place where over 40,000 Jews live, the country can also be seen as a vast Jewish graveyard. And yet its Jewish culture was as central to the country’s identity and self-understanding as it was to the Jews’, as scholars in the film explain. 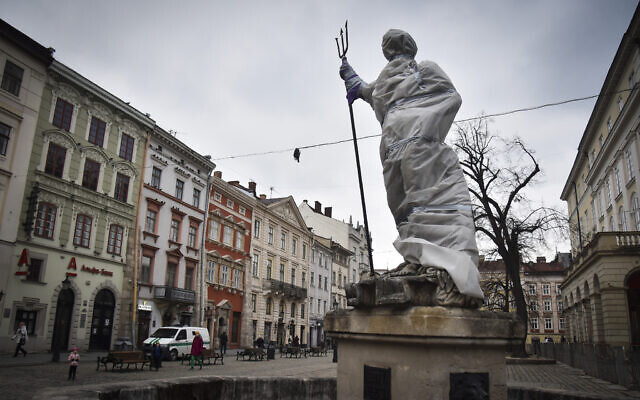 As I write this, Ukrainian culture as a whole is literally under fire. A museum was razed in Ivankiv. Kharkiv’s Central Square is a war zone. Lviv is bracing for the worst by packing sandbags around public sculptures and hiding museum collections.

“The heritage war for identity means that the target is not only territory or some military or civil objects,” Ihor Poshyvalio, the director of the Maidan Museum in Kyiv, told PBS NewsHour Thursday. “The target is our historical memory, our cultural traditions, our national and individual identity, our memory and identity as a nation.”

The historical memory of the Jews was only saved from oblivion by the survivors, and by a dogged little man who was rewarded for his troubles with a prison term. “Song Searcher” ends on a note that is neither hopeful nor despairing – or maybe it is both: Igor Polesitsky, a violist and klezmer from Florence, sits near the graves of his slain Jewish relatives in Kalinindorf, once a Jewish agricultural colony in southern Ukraine.

“Look around here, there’s nothing Jewish remaining,” he says, after playing a requiem preserved by Beregovsky. “The one thing that truly remains is what was saved by Moyshe Beregovsky. So his archive is what brings us here, and we become a link with the spirit of people who are no longer with us.”


Do you value The Times of Israel?

If so, we have a request.

Every day, our journalists aim to keep you abreast of the most important developments that merit your attention. Millions of people rely on ToI for fast, fair and free coverage of Israel and the Jewish world.

We care about Israel – and we know you do too. So today, we have an ask: show your appreciation for our work by joining The Times of Israel Community, an exclusive group for readers like you who appreciate and financially support our work.

Already a member? Sign in to stop seeing this

We’re really pleased that you’ve read X Times of Israel articles in the past month.

That’s why we started the Times of Israel ten years ago – to provide discerning readers like you with must-read coverage of Israel and the Jewish world.

So now we have a request. Unlike other news outlets, we haven’t put up a paywall. But as the journalism we do is costly, we invite readers for whom The Times of Israel has become important to help support our work by joining The Times of Israel Community.

For as little as $6 a month you can help support our quality journalism while enjoying The Times of Israel AD-FREE, as well as accessing exclusive content available only to Times of Israel Community members.

Thank you,
David Horovitz, Founding Editor of The Times of Israel

Already a member? Sign in to stop seeing this

A24’s Everything All over the place All at When

Fri Mar 25 , 2022
Jobu Tapaki (Stephanie Hsu), the universe-hopping villain of Every little thing Everywhere you go All at After, wears ensembles of escalating outrageousness about the system of the film: a matching plaid cape trench and visor established, a stylized golfing costume, an Elvis-esque rhinestoned jumpsuit. Omnipotence may well saddle you with […] 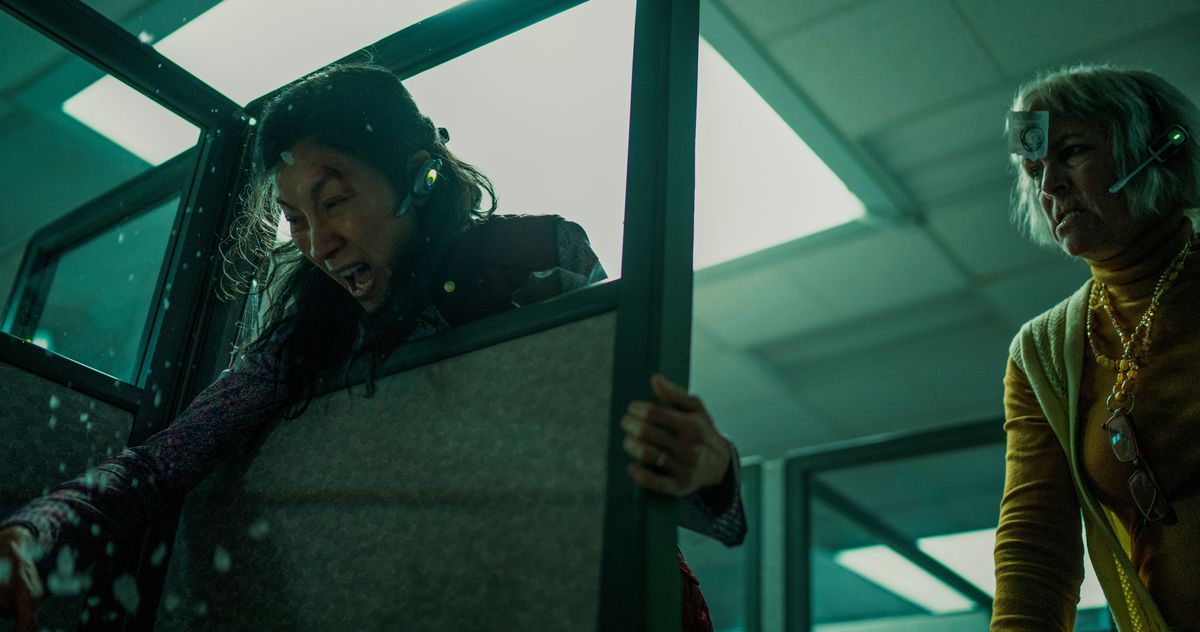