Image by Chineme Elobuike for Thrillist

March 4, 2022 might as well be renamed Colin Farrell Day. The actor has not one, but two films out in theaters on Friday. If you want to go for a big blockbuster, there’s always The Batman, where Farrell is unrecognizable as Oswald Cobblepot, aka The Penguin, sporting prosthetics and a Robert De Niro impression. If you’re more interested in something a little bit lower key, there’s After Yang, South Korean director Kogonada’s stunning sci-fi feature from A24 about a man (Farrell) trying to repair his family’s broken robot. These two films speak to Farrell’s immense range. In one he’s hamming it up as a villain; in another he’s subdued, trying to understand the mysteries of existence.

Over his career, Farrell has proved time and time again he’s more than the sex symbol that his early roles might have pegged him as. He’s one of our finest actors, pursuing varied roles with a range of directors, never afraid to go as weird as possible. Thus, in honor of his big weekend: Here are our 10 favorite Farrell performances.

New York genre film master Larry Cohen (God Told Me To, The Stuff) wrote the Times Square-set screenplay for Phone Booth, an unrelenting exercise in suspense that puts a goatee-sporting Farrell in a glass box with a rifle scope aimed at his head. The movie has an Old Testament sense of morality, with Farrell’s smarmy publicist forced to pay for his sins, but director Joel Schumacher also tricks out the film with slick split-screen effects to sell the ticking-clock 24-like urgency. (It helps that Jack Bauer himself, Kiefer Sutherland, voices the pissed-off sniper.) Schumacher cast Farrell in the Vietnam War drama Tigerland, the actor’s breakthrough movie, and the director shows a real understanding of his gifts here, weaponizing Farrell’s vanity, charm, and vulnerability to make the audience squirm. —Dan Jackson

It’s hard to imagine any other man turning so many dignified ladies into horny messes the way that Colin Farrell can. That’s what he does in Sofia Coppola’s The Beguiled as Corporal McBurney, a union soldier who gets treated to the hospitality of a bunch of southern belles when they discover him wounded on the property of their all-girls school. Although Coppola makes the women and their gothic tale of sisterhood the forefront of this remake, Farrell makes it easy to see why Nicole Kidman’s straight-laced Miss Martha and Kirsten Dunst’s lovelorn Edwina alike would feel faint in his presence—the Virginia humidity having nothing to do with it. He’s just as beguiling as his sexually repressed hosts—portraying McBurney as somewhat of a shapeshifter who is at first sincere and charismatic, until his attempt to seduce as much as he can out of Miss Martha Farnsworth’s Seminary for Young Ladies makes him into a monster. —Sadie Bell

Colin Farrell had only been famous in America for a couple of years in 2002, but that didn’t stop him from coming out swinging opposite Tom Cruise in Steven Spielberg’s dystopian action adaptation of Philip K. Dick’s Minority Report, wherein he played smarmy Department of Justice agent Danny Witwer, sent to audit near-future D.C.’s “Precrime” prototype police division, which uses clairvoyant “precogs” to predict crimes before they happen and arrest the would-be perpetrators. When the precogs suddenly predict that one of the program’s officers, John Anderton (Cruise), is about to commit a murder, Witwer leads the manhunt for Anderton when the suspect goes into hiding. Farrell’s range of talent is on full display here as he proves he is even more fun to watch when he plays floppy-haired cutie pies who are also total assholes. —Emma Stefansky

John Smith is a near-mythic figure in American history, but in Terrence Malick’s lyrical depiction of the settlement of Virginia, Colin Farrell lends the reluctant explorer a rugged, rough around the edges characterization that melds well with Malick’s mournful and complex version of our country’s discovery. Farrell’s John Smith is soft-spoken yet authoritative, a hero who isn’t necessarily heroic whose emotions are interiorized opposite co-star Q’orianka Kilcher’s spirited Pocahontas. And, not for nothing, this might be the most devastating Farrell has ever looked on screen, with flowing romance novel hair, a rough cut beard, and constantly unbuttoned sweaty shirts. —ES

In his second collaboration with Yorgos Lanthimos, Farrell’s character Dr. Steven Murphy is presented with a moral dilemma. Everything is not as it seems when we find that the surgeon is a mentor to a young man named Martin (Barry Keoghan). When it’s revealed that Dr. Murphy killed Martin’s father in an operation years ago, Martin orchestrates a tit for tat with the doctor and his family that allows us to see Farrell at his most unnerving. Although the film lives in a cold, restrictive tone, Farrell’s distress is anything but as he’s forced to face a Sophie’s Choice that amounts to questions of blame, regret, and revenge. Keoghan may ultimately be the disturbing scene-stealer, but few could have made for a better sparring partner and tormentor than Farrell. —SB

Colin Farrell’s gift is that he’s a character actor in the body of an absolute dreamboat, and there’s no greater evidence of this than his performance in Steve McQueen’s Widows. When he’s not coated in prosthetics, like he is playing the Penguin in The Batman, he uses those good looks to his advantage playing slimy creatures like alderman Jack Mulligan. In McQueen’s underrated and fascinating heist film, Jack exemplifies a kind of old white Chicago politician with only thinly veiled disdain for the Black people he ostensibly represents. Farrell lets that come through even when McQueen doesn’t focus on his face: In the best scene we hear his dialogue even as the camera stays focused on the outside of his car. —Esther Zuckerman

One of Farrell’s most recent performances is also one of his best. In Kogonada’s After Yang, Farrell is in a quieter mode. It’s not the intentionally stilted work he does with Yorgos Lanthimos, but it’s in a gorgeously minor key. In the film he plays Jake, a tea shop owner living in a futuristic city. When his family’s robot Yang (Justin H. Min) breaks down, Jake sets off on a journey to mend the technosapien who has become a big brother to his young daughter. To do so, Jake is forced to quite literally delve into Yang’s memories, and subsequently confront how he, as a human, sees the world. Farrell’s observant interpretation finds a father trying to relate to his daughter through the prism of the robot she loves. He also does a Werner Herzog impression, which is just icing on the cake. —EZ

Farrell really is a perfect match for the Irish cynicism of Martin McDonagh, and that’s perfectly on display in In Bruges. Here, he plays a depressed, misanthropic assassin who accidentally killed a child during a hit, and has been quasi banished to the quaint Brussels town of the title to await more instructions. Farrell’s perpetual sneer contrasts with his partner Brendan Gleeson’s wide-eyed energy, but he also uncovers the real pain behind his character’s smug exterior. —EZ

For a man who looks like he does, Colin Farrell manages to be quite the shapeshifter, using his symmetrical face and floppy hair to play a cavalcade of sleezes and assholes. But Greek director Yorgos Lathimos, the auteur behind Dogtooth, apparently saw something in Farrell that no one had quite yet. Enter 2015’s The Lobster, starring Farrell as David, a schlubby man who, after his wife leaves him, is mandated as a single person to go to a hotel for 45 days and if he cannot find a partner in that timeframe, he’ll be turned into an animal. Wild (yet not totally unrealistic) premise, right? He plays David with an aching awkwardness as he navigates trying to find a new partner, all of his usual charms buttoned up and shelved. He tentatively courts women, all the meanwhile an insurmountable loneliness always lurks in the fringes. At the same time, Lathimos brings out the dark humor of the situation and gives Farrell the chance to explore it in his own drily awkward way. It’s a performance that gave a new way to perceiving Farrell as a leading man. —Kerensa Cadenas

“I’m a fiend for mojitos.” Can you imagine Chris Pine, Chris Hemsworth, Chris Pratt, or Chris Evans selling a line like that? No matter how many contemplative A24 indies or big-budget superhero tentpoles he stars in, Farrell will always carry a sleazy, rougeish magnetism that sets him apart from other male stars of his generation. Working with director Michael Mann, who nimbly reconfigured his own groundbreaking ’80s TV hit into a digitally smeared Florida crime epic, Farrell brings a sweaty intensity to the role of Detective “Sonny” Crocket, the headstrong cop first played by Don Johnson on the series. In his charged-up dealings with Jamie Foxx’s “Tubbs” and his speed-boat romance with Gong Li’s Isabella, Farrell finds poetry and grace in a part that could have felt like an empty exercise in cool-guy iconography. Yes, he can shoot a gun and take down a drug lord. But, really, you want his hand around a mojito and his feet on the dance floor. —DJ

Fri Mar 4 , 2022
An ongoing conflict in between Russia and Ukraine courting back to the collapse of the Soviet Union has grow to be a comprehensive-out war with world-wide — and business — reverberations. Russia’s booming film and Television sector, with its deep, governing administration-backed coffers, missing its grip on the environment stage […] 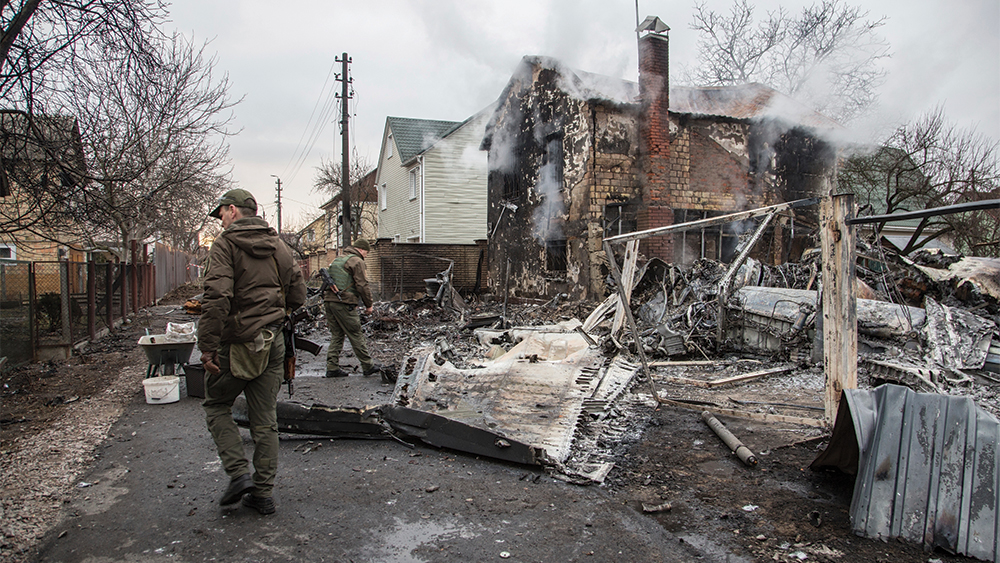