Can we finally welcome the full-throttled return of theater and many more live performances in 2022, to join the arts groups that opened back up in 2021? Fingers crossed and fervent wishes sent for the end of the pandemic, here are some of the arts-and-culture events we’re looking forward to seeing in the new year. (As always, please check event websites for COVID requirements and the latest information, and heed local health authorities’ safety recommendations as they’re updated.)

Ah, what a year it has been! As 2021’s final hours pass by, take a peek forward at some of our region’s most anticipated events, places and things for 2022, including places we’re looking forward to eating at, exciting things to do and more.

This new opera, portraying an African American family who experience the joy of raising a son and the grief of having the son killed by a police officer, was deemed by The Washington Post in 2020 as “a triumph” and “the best new opera that barely anyone saw.” Created by composer Jeanine Tesori and librettist Tazewell Thompson, the opera premiered in July 2019 at the Glimmerglass Festival but its 2020 dates at the Kennedy Center and Lincoln Center, among others, were wiped out by pandemic shutdowns. Fortunately, the opera The New York Times called “powerful — as well as sadly timely” will soon be seen in more places, with Seattle Opera among the companies scheduled to present it in 2022.

A leader in presenting free outdoor dance throughout the pandemic, Oliver Wevers’ contemporary company returns to theaters — three of them — to present a trio of world premieres, from choreographers Ethan Colangelo, Jakevis Thomason and Wevers himself.

While it’s been a joy to see Pacific Northwest Ballet tentatively returning to live performance (the two fall repertory programs were small-scale works for subscribers only), I’m eager for them to dive full-on — a swan dive, as it were — into an enormous, glorious story ballet, with Tchaikovsky’s soaring score and a long, long row of swan ballerinas on pointe. Bring it on.

Always beautifully musical, the Seattle native’s longtime modern-dance company returns to Meany Hall, complete with their own musicians, to perform three contemporary works: “Words,” set to the music of Mendelssohn; “Rock of Ages,” set to Schubert, and “Festival Dance,” to a three-piano work by Hummel.

Last year Jazmine Sullivan broke a six-year album drought with her universally acclaimed “Heaux Tales” reminding the world of her R&B royalty status. The worth-the-wait project’s arrival after one of the singer’s extended hiatuses felt like a low-key event — as “low-key” as can be when your album rollout includes a Super Bowl duet with Eric Church, at least. Tickets to hear Sullivan’s gripping meditations on womanhood and relationships, spliced into stereotype-defying vignettes on “Heaux Tales,” at the Paramount were quickly scooped up — many by opportunistic resellers, it seems, as roughly 200 resale tickets were available as of this writing. But if anyone’s voice is worth paying a premium for, it’s Sullivan’s.

After pandemic delays, Gen Z’s biggest American pop star finally returns to Washington a bona fide arena headliner with a sold-out, two-night stand at Climate Pledge Arena. The wait was long enough for Eilish to unload a second acclaimed album in last year’s hypnotically sparse “Happier Than Ever,” backed by an Apple TV+ doc and her own Disney+ concert special — the new pandemic standard for superstar album rollouts. Two years after sweeping the Grammys’ top awards, the 20-year-old pop juggernaut and reformed neo-goth has a shot at grabbing three of the top four at this year’s ceremony, with her big bro/songwriting partner Finneas up for best new artist separately.

2021 belonged to Olivia Rodrigo, the breakout pop queen who has a chance to follow in Eilish’s Grammy-sweeping footsteps. Just a week into the new year, Rodrigo, the latest teen Disney star to ascend the pop charts, dropped the song of the year with “drivers license” — a lovesick smash that had America in its feelings the way no one over the age of 21 could provoke. The 18-year-old quickly swatted down one-hit-wonder whispers, months later unleashing her raved-about debut album “SOUR,” which evokes Taylor Swift’s singer-songwriter cinematics and turn-of-the-century pop-punk. Though she could easily play the shiny new hockey arena across town, Rodrigo’s first headlining tour hits the comparatively intimate WAMU Theater just three dates in.

Of all the experiments with pandemic-era theater, “A Thousand Ways” must be the most sensitive to the moment and the bizarre new conditions under which we’ve lived: locked down and fundamentally alienated from each other, yet intimately connected with strangers across the globe in our questions (what’s happening? For how long? Will it get me or someone I love?) and our fear. “A Thousand Ways” started in September, when pairs of strangers volunteered to call each other on the phone and respond to prompts and sometimes-intimate questions. It continued in November, when pairs of strangers met face-to-face at On the Boards (separated by a plexiglass barrier) to do the same. In “Part Three,” 12 strangers will convene in a room to collectively tell a story of perseverance. It sounds weird, and slightly awkward — but so is right now.

In this screwy 2018 play by Trish Harnetiaux, some chipper employees of a shoe store somewhere in the Pacific Northwest go into the wilderness for a little employer-mandated self-discovery and team-building. What happens next gets a little swirly: There’s a new employee who needs to be initiated into the mysteries of the workplace “System,” someone working on a novel about nachos and a mysterious casino in the mountains. Directed by Maggie L. Rogers.

It’s 2013 and the Obama Administration has started drawing down its troops in Afghanistan. Taroon, who used to work as a translator for American forces, is hiding out in his sister’s Kabul apartment — he’s a Taliban target — and trying to secure the special immigrant visa the U.S. owes him. Meanwhile, his wife, who’s been living separately, has just gone into labor. A New York Times critic describes the play, by Sylvia Khoury, as having “elements of a Greek tragedy and an espionage thriller … if I still bit my nails I would have no nails left now.” Lucky for us, local genius Valerie Curtis-Newton directs — she excels at impossibly complex relationships, high-stakes decisions, the human consequences of seemingly impersonal political decisions and cultural forces, and the other elements that make “Selling Kabul” tick.

You’ve never seen bodies like painter Christina Quarles’ bodies: They’re rubbery and liquid, with improbable geometries and impossible physics, and sometimes they’re stacked and fused, like several selves bursting out of a single piece of flesh. Which makes all the sense in the world when you learn the Los Angeles-based artist is explicitly painting about gender and race — but she’s also really interested in paint. “The paintings feel as if they are ambiguously about painting itself,” critic Debra Brehmer recently wrote in Hyperallergic, “with the figures playing a supporting role.”

The uncertainty and financial costs of COVID-19 have put a damper on traveling art exhibitions, leading some museums to focus more on shows drawn from permanent collections and local loans — ”Our Blue Planet” at Seattle Art Museum is one of those shows, featuring around 100 works on the theme of water. Expect a huge range of objects, across centuries, mediums and the globe: photographs from India to the U.S., Japanese woodblock prints, video work from the Philippines and the Pacific Northwest, fluorescent-light sculpture and paintings from 19th-century Germany to 21st-century Australia.

Mon Jan 3 , 2022
Canadian photographer Jeff Wall says, “I start out by not photographing.” That’s correct: no snaps, no selfies. He isn’t going to like the idea — in his words, of “Just operating all-around for one thing to photograph.” Alternatively, when he sees a little something putting, he thinks about it for […] 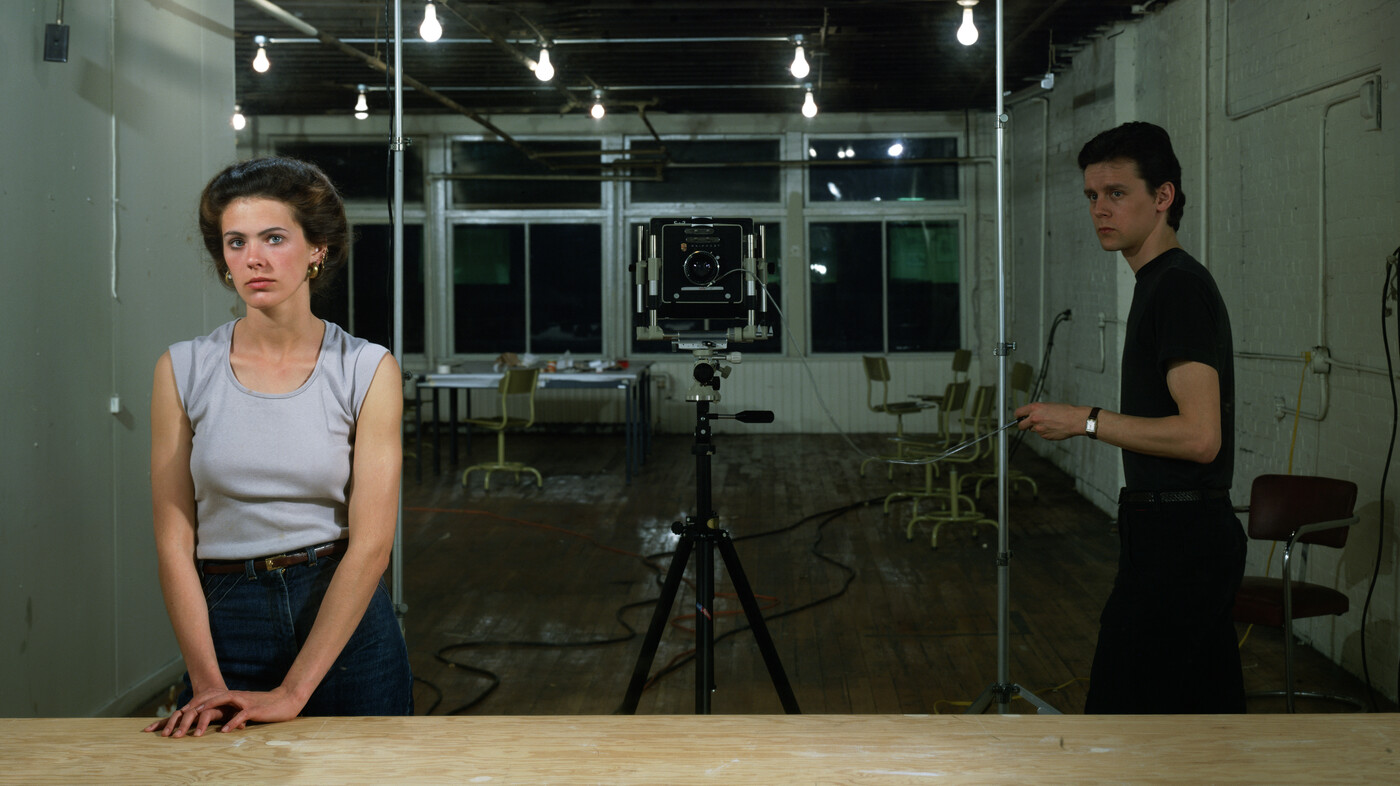