Jamie Foxx tried his hand at horror-comedy movies in 2022 with Day Shift, in which the Academy Award winner plays a hunter of vampires lurking in the San Fernando Valley. If you are like me, this addition to the 2022 Netflix movie schedule might have gotten you in the mood to revisit other flicks about monsters like werewolves, ghosts, zombies, or other creatures from more traditional horror stories that also have a good sense of humor. If you are looking to have a scary good time, the following are some of the most hilarious creature features now available on streaming — starting with one of the best funny vampire moves in recent memory.

A group of centuries-old bloodsuckers (including Taika Waititi, Jemaine Clement, and Jonathan Brugh) invite a film crew into their New Zealand home to document their struggles with romance, sunlight, rival werewolf packs, and modern times in general.

Why it’s a great funny monster movie: Waititi (the future Academy Award-winning director of Jojo Rabbit and two of Marvel’s Thor movies) and Flight of the Conchords star Clement also co-wrote and co-directed What We Do in the Shadows — a cleverly convincing and thoroughly hilarious, mockumentary-style send-up of lore pioneered by Bram Stoker that later inspired a hit sitcom on FX.

Rent (or buy) What We Do In The Shadows on Amazon (opens in new tab).

Why it’s a great funny monster movie: The film that put director Edgar Wright on the map and solidified his star and co-writer Pegg as one of the sharpest talents in both comedy and genre story-telling is Shaun of the Dead — less a spoof than it is a love letter to the horror subgenre pioneered by George A. Romero and, genuinely, one of the most believable zombie movies of all time for its authentic use of humor amongst earnest and grisly thrills.

Why it’s a great funny monster movie: While not quite as realistic or even as scary as the aforementioned British horror-comedy above, this hit from Uncharted director Ruben Fleischer and Deadpool scribes Rhett Reese and Paul Wernick — is easily one of the most exhilaratingly fun takes on the zombie movie genre ever made, with special thanks to the Zombieland cast — who reunited for a follow-up a decade later.

Rent (or buy) Zombieland on Amazon (opens in new tab).

An American Werewolf In London (1981)

After suffering a horrific attack while backpacking in the English countryside, a student from the U.S. (David Naughton) is haunted by the ghost of his best friend (Griffin Dunne), who warns him about the vicious beast he will soon become at the next full moon.

Why it’s a great funny monster movie: While cleverly witty and overtly silly enough to be considered a comedy, writer and director John Landis’ An American Werewolf in London is still considered to be among the all-time finest movies about lycanthropes, especially for a monumental transformation sequence courtesy of Rick Baker’s Academy Award-winning makeup effects.

Stream An American Werewolf In London on Amazon Prime (opens in new tab).

An American Werewolf In London (1981)

Why it’s a great funny monster movie: No film about spiritual hauntings has ever been more of an uproarious, feel-good time than Ghostbusters — an undisputed classic written by stars Aykroyd and Ramis and directed by the influential comedic filmmaker, Ivan Reitman.

An absent-minded inventor (Hoyt Axton) brings home a Christmas gift for his son (Zach Galligan) in the form of an adorable, furry, one-of-a-kind creature that — if a certain set of rules are not followed — could mean danger for his small town.

Why it’s a great funny monster movie: There is no doubt that the titular batch of little green monsters in Gremlins are deadly, but they will also surely have you dying with laughter at their cartoonish antics in this classic holiday horror flick from writer Christopher Columbus, producer Steven Spielberg, and director Joe Dante.

In a small, dreary desert community in Nevada, a pair of disillusioned handymen (Kevin Bacon and Fred Ward) are forced to put their plans for leaving town on hold when a horde of giant, underground-dwelling, man-eating worms begin swallowing up their friends.

Why it’s a great funny monster movie: Also one of the best Kevin Bacon movies and the one proved him to be an all-time great Scream King a decade after starring in Friday the 13th, director Ron Underwood’s Tremors is one of the best monster movies of its time while, itself, being a fun, cheeky throwback to creature features of yesteryear.

Rent (or buy) Tremors on Amazon (opens in new tab).

In a small, quiet town in South Carolina, a police officer (Nathan Fillion) and others must band together when a horde of small, parasitic worms from outer space begin to turn their friends into grotesque, flesh-eating mutants.

Why it’s a great funny monster movie: Imagine if the Graboids from Tremors were much smaller and capable of a fate worse than death, add even more splatteriffic gore and gross-out humor, and you would essentially have Slither — the acclaimed feature-film debut of writer and director James Gunn (who would work with Fillion several more times).

On a small island off the coast of Ireland, townsfolk band together at their local bar to do the one thing that, for some reason, will protect them from getting snatched by a pack of bloodthirsty, sea-dwelling aliens: drink as much alcohol as possible.

Why it’s a great funny monster movie: The invasion of Lovecraftian extra-terrestrials with a resistance to intoxicated humans is a hilarious enough concept on its own, but, luckily, director Jon Wright and writer Kevin Lehane’s execution of Grabbers is a blast all the way through.

Rent (or buy) Grabbers on Amazon (opens in new tab).

In a small-town, a young couple (Grant Cramer and Suzanna Snyder) struggle to outrun and outwit a group of alien invaders who have disguised their deadly labyrinth of a ship as a circus tent and taken the form of grotesque, humanoid harlequins.

Why it’s a great funny monster movie: With a title like Killer Klowns from Outer Space, you might expect the Chiodo Brothers’ cult favorite to be an aggressively cheesy mess, and you would not be wrong, but its unique production design, cleverly constructed macabre humor, and genuinely unnerving makeup effects make this a truly investing alien invasion thriller and the perfect clownish horror flick for people who are not ready to see It.

A young, wise-cracking New York cop (Will Smith) is recruited into a top secret organization that specializes in monitoring extra-terrestrial activity on Earth by an uptight veteran agent (Tommy Lee Jones).

Why it’s a great funny monster movie: I would be willing to argue that no film has ever mastered the combination of the alien invasion subgenre with comedy as flawlessly nor with as much acute sophistication as Men in Black — director Barry Sonnenfeld and executive producer Steven Spielberg’s dazzling adaptation of an irreverent Marvel comic starring two Oscar winners at the top of their game.

A group of youngsters discover that the iconic cinematic villains that they are obsessed with are not only real, but are causing trouble in their home town and the kids assume the responsibility of saving the day.

Why it’s a great funny monster movie: If you are looking for something that has all the most essential movie monsters in one (including Count Dracula, The Mummy, The Wolfman, a Creature from the Black Lagoon-esque fishman, and Frankenstein’s Monster) and is not that scary, look no further than The Monster Squad — director Fred Dekker and co-writer Shane Black’s cult favorite fusion of a fun family adventure like The Goonies with Universal’s horror classics.

A sexually innocent woman (Kristen Connolly), a ditzy blonde (Anna Hutchinson), a brutish jock (Chris Hemsworth), a brainy student (Jesse Williams), and a stoned slacker (Fran Kranz) find their much-needed break from college interrupted by a family of killer zombies, but soon discover that nothing is truly as it seems.

Why it’s a great funny monster movie: Now, if you are looking for something a little (or a lot) scarier than The Monster Squad and one that has, literally, every type of beastly horror antagonist you could ever imagine, look no further than The Cabin in the Woods — director Drew Goddard’s brilliantly subversive and unapologetically insane deconstruction of the ill-fated cabin-in-the-woods trope.

Rent (or buy) The Cabin In The Woods on Amazon (opens in new tab).

Sometimes the best kind of monster movies are the ones that do not take themselves all that seriously. There are no better examples of this than the 13 creepy comedy classics above.

Sat Sep 10 , 2022
KYIV, Aug 30 (Reuters) – Get-togethers almost never begin with a DJ arriving in his army uniform, but this is the fact for Ukraine’s electronic new music scene as it forges on by way of the war. Ahead of the Russian invasion started on Feb. 24, Ukraine’s capital, Kyiv, was […] 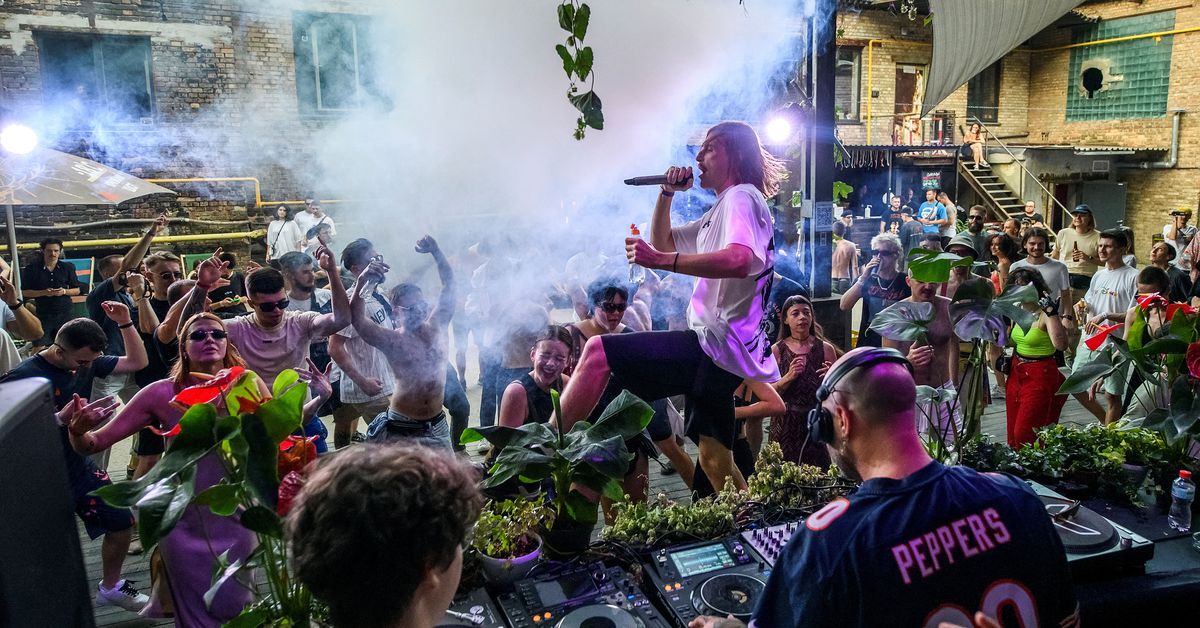